I am looking at the flight path on the screen directly in front of me—one more hour until I hit London—I am going to be performing The Pink Hulk across the pond! My first time taking my solo show globally. The night before my friend Emma asked me, “Did you ever think this would be happening with The Pink Hulk—that you would be taking it to Europe?” And without hesitation, I said, “Absolutely not.” And I thought about that. Emma and Helene, who was also there last night, saw the sixth show of The Pink Hulk’s during its very first run ever in the summer of 2016—in the Planet Connections Theatre festival in New York City. Then I had been touring it across the U.S. for the past two years and now…!!!

I tried to sleep on this flight, and I could hardly at all (well, the crying baby next to me didn’t help—though she was super cute when she was not crying)!

Packing and getting ready to leave earlier that day, I was super excited, and when I got to the airport, I felt strange and out of sorts. When I was checking my suitcase, I was telling the American Airlines attendant that I was so thrilled to be performing my play about being a two-time cancer survivor in Europe. Then I just burst into tears—she was so nice and said, “The is so great. Congratulations,” as the scale read that my bag was overweight (over the 50-pound limit)—whoops! But she put it on the conveyer belt anyway—thank you, American Airlines.

I was suddenly overcome with emotion—I realized that I was also a bit nervous. As much as I was excited to come to England, I was really overwhelmed—what keep running through my head: will my story translate over here, when I embark on performances in Sweden and Finland right after England—will audiences stay for the talkbacks? Will European audiences identify with the topics I cover with The Pink Hulk? Will these audiences be receptive to my story?

And then I reflected that today is my 4-year anniversary of having been diagnosed with breast cancer—time to celebrate and realize that all of these worries should take a backseat—this is a time to celebrate and recognize and cherish this milestone. And another special anniversary to day. This marks my 30th anniversary year of when I first landed on the shores of England, as a studies abroad student at James Madison University, and then again 3 years later, to work there as an intern for Time magazine in London. And I am still using the pouch to hold my passport in from 1988!! A little worse for the wear, but it still works!! LOL!

I loved the U.K. And from those two experiences, I first emerged a student of the arts and then a writer of a magazine. And now I am coming back here as a performer. Who knew?

I will be staying with my best friend Karen and her family—she and I spent the summer backpacking through Europe in 1991—one of the best times of my life—stopovers included Italy, Greece, Hungry, Germany and Budapest.

My Pink Hulk shows will be in Manchester this Sunday where friends from the U.S. will be attending too. I am so excited and thankful that Steph Green and Sarah Weston of Thought Plane Theater offered to host the show. I met them when we were performing together in the Cincy Fringe. The friendships I have made through these festivals have been some of the greatest friends I have ever met. The Pink Hulk has opened doors for me that I never dreamed would happen. I have been to so many cities in the U.S. and now going to Sweden and Finland—countries I have never been to.

It goes to show you, that anything is possible. Next time when someone asks me, “Did you ever think that you would be performing The Pink Hulk overseas?” Without trepidation, I will declare with a resounding, “YES!”

PINK HULK PANELIST! On July 24, I was so honored to be on the Industry Insight Series Panel at The American Academy of Dramatic Arts–my alma mater–on Producing and Creating Your Own Work. It was an amazing time with these fantastic students and my awesome fellow panelists David Dean Bottrell, James Kautz and Alexander Pepperman. Thanks to Jon-Michael Hernandez, Jennifer Smolos (our moderator) and AADA NY for the opportunity to share the creation/producing of my solo show The Pink Hulk and how it went from page to stage! I was so struck by the students. They were so engaged during the discussion and asked such great questions.  I found myself fighting back tears as I told that group how this journey with The Pink Hulk is one of the greatest joys in my life and would not change a thing I have done. There is nothing better than giving people hope and empowering them. There were 7 of the students from this group that stayed after with me, asking more questions. I had no idea that an hour had passed after the event was over. I could have talked with them for hours. In fact, I was the last to leave the building from that event. I like to be the first to arrive and the last to leave with any event or party I attend! LOL!

There is nothing more satisfying than helping students along with their careers. When I was at the Academy, I remember how much I loved when we had guest speakers or a panel. My favorite memories are when Victor Garber and Mercedes Ruehl were celebrity guest speakers–I am a huge superfan. I was so inspired by them. In fact, just last year, I ran into Ms. Ruehl at Dixon Place and came right up to her to thank her for the great advice she gave us back then and how I was blown away when she told my class that studios in the East Village were $250 a month back in the ’60s!–we had a great laugh about that! And I remember when she came to speak to us, that one day, I hoped that I could be in a position to be on a panel or be a guest speaker, and share what I have learned along the way with others, as she had done. And it has come true. 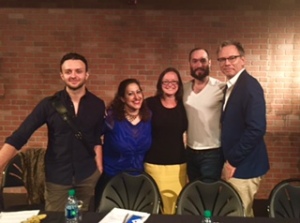 So excited getting ready for The Pink Hulk‘s full production in Planet Connections this summer.

Through my participation in Planet Connections, I will be raising funds for Mary’s Place By the Sea in Ocean Grove, NJ, which is a wonderful nonprofit organization for women who are receiving treatment for cancer. They provide services that complement cancer patients’ medical treatment, including oncology massages, nutrition education, individual psychotherapy, Reiki, guided meditation and yoga. They also offer integrative services to women with cancer, and provide rest and support during this challenging time in their lives. A brand-new, larger facility is scheduled to open in mid-May!

Here is an article I wrote on Mary’s Place during my wonderful visit to this sanctuary by the sea!

Here is a link to my article on the PIT and the value of IMPROV and the ZEN EXPERIENCE!